Optimizing The Use of Body Fat As An Exercise Energy Source - train high, sleep low


Muscle fiber contraction is powered by ATP – a molecule that contains high energy phosphate bonds. It is the final step in cell energy metabolism being produced via both glucose and fat metabolic pathways. As exercise intensity increases, the percentage of energy derived from glucose metabolism increases while that from fat metabolism decreases. 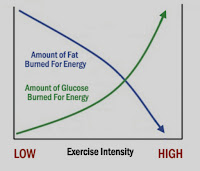 Traditionally, training to maximize performance (especially at high levels of exercise intensity) has focused on improving the glucose metabolism pathways. Intervals have been the most successful strategy as they stress both the glucose pathways to optimize the use of muscle glycogen as well as stress the cardiovascular system to improve the delivery of oxygen to the exercising muscle (higher cardiac stroke volume, more capillaries to the muscle cells themselves).


To assure that adequate energy stores were available for the high energy, interval workouts, a key part of all serious training program has focused on post exercise muscle glycogen repletion (replenishment) to get ready for the next riding session.

There have been a number of studies investigating the idea that improving fat metabolism might be another option to improve high exercise intensity performance. These studies limited glycogen availability to the exercising muscle with the thought that this metabolic stress would then “force” the cell to develop more effective (and efficient) fat --> ATP pathways.  And this improved fat metabolism might then add a few extra ATPs of energy at all levels of exertion to provide an edge for the elite athlete. These papers (using carbohydrate restriction as the training stress) did show training adaptations including increased whole body fat oxidation as well as increased activities of oxidative enzymes when compared to training with normal glycogen stores and high CHO availability. However the subject athletes experienced disappointing performance increases.

These 2 graphs might give a better idea of what was hoped. This (top ) graph shows the relative contribution of fat versus carbohydrate to energy calories at exercise intensities up to 85%VO2 max.

This recent paper offers a different strategy to implement a low carb/high fat training approach and, if one looks at their success, a possible explanation as to why previous studies failed to show any benefits from training on a low carbohydrate diet.

As one reads the original study - here's a nice analysis in simpler language - the challenge appears quite similar to the issues of using altitude as a training tool (the stress being a low ambient oxygen levels at altitude). Originally it was speculated that the stress of living at altitude (where there is less oxygen per liter of air taken into the lungs) would induce already understood changes in the athletes' blood chemistry to facilitate the releasing of additional oxygen from red blood cell hemoglobin.  (The compound 2,3 DPG, which aids the release of oxygen from hemoglobin, forms when a climber - or athlete - spends 3 or 4 days at altitude.) But when the athletes lived at altitude and continued their high intensity training program, the hoped for performance benefits did not materialize. The reason? Although the blood chemistry changes did occur, de-conditioning was evident in the interval training results as there was not enough ambient oxygen (even when released more easily from the red blood cells) to permit maximal interval intensity and a maximum training effect. The solution?  “Live high and train low”. That provided the "living at altitude" stimulus to form additional 2,3 DPG and maximized the interval training effect as training ("train low") was now being done with a higher ambient oxygen concentration. This combination of “live high, train low” maximized the efficient use of oxygen for high level performance at any altitude.

In the original studies that looked at CHO deprivation as the route to stimulate efficient fat metabolism, the lack of carbohydrates during HIT interval training kept the athlete from maximizing the level of interval intensity (talk to someone who has trained in the South Beach diet - a carbohydrate restricted diet - and they will tell you it is like training with the bonk).  As a result an athlete's personal VO max slowly fell over time as they de-conditioned. The current author's used a hybrid model:

2) "sleep low" (no carbohydrates after the HIT session) to stimulate improvement of the cell's  fat metabolizing enzymes as the athlete's muscle cells work to rebuild post exercise glycogen stores from the body's fat stores.

They also added the additional stimulus of a low intensity training session in a glycogen depleted state (without glucose supplements) a fat metabolism stress (and as the LIT session was at 65% of maximum activity, a low glycogen or bonk situation, performance was not limited by glucose availability (again, the common complaint of low carbohydrate diets is that one always feels as if they are bonked and cannot perform at any more than 50 – 60% of their VO2max). The specifics of the author's program are outlined in this online analysis.

The finding of an improvement in fat metabolism at 50 – 60% VO@max has been reported before. What is different in this study is:

An third observation, an impact on body % fat composition supports a modification of fat metabolism during the low carbohydrate, post exercise period which preferentially metabolized fat to rebuild muscle glycogen stores.  The subjects on post exercise carbohydrate restriction burned a whopping 8.7 ± 7.4 % body fat literally overnight, while the control group lost a measurable, but significantly lower and overall non-significant 2.6 ± 7.4% of their body fat. And both were on equi-caloric daily diets so this is not just fat loss due to calorie restriction. As an aside, this observation could be used to facilitate weight loss with a restricted calorie diet.  In the past the mantra was "eat fewer calories than you are using" (by exercise) and you will lose fat. But this observation suggests that WHEN you eat your calories may be just as important as the total daily calories consumed. Exercise during the day, eat your carbohydrate calories before your daily exercise routine and then switch to a low carb diet in the afternoon/evening and you may increase weight loss.

So where does this leave us?

1) If you are interested in pursuing that extra 1 or 2 % performance edge for a competitive, then this regimen has merits.

Load up on carbs a few hours before and during during your HIT training and cut off your carbohydrate intake when you don't need them (during sleep and low intensity exercise) to maximize the positive adaptive responses in your fat metabolism pathways.

2) If you are doing a multi-day ride, I still favor the use of the post ride window to advantage the replacement of muscle glycogen and minimize the odds of bonking the next day.

3) And if you are trying to lose a few pounds, plan your diet to avoid those evening carbohydrates after an interval training ride.

It can be a long and tedious search to find the training and nutritional tips that will gain you a competitive edge. This blog (along with the CPTIPS website) is a collection/discussion of performance tips (nutritional, training, and equipment) supported by scientific evidence.

Have a specific question or topic for a post? Feedback and ideas are always welcomed.